Start a Wiki
Yukari Hayasaka (早坂紫 Hayasaka Yukari) was once a high school student, but she later becomes a model for the Treetop agency. 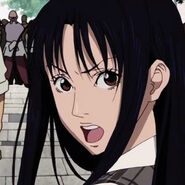 Yukari's original bangs
Add a photo to this gallery
Yukari has mid-back length or waist-length black hair that has bangs hanging over her eyebrows (it was later cut above her eyebrows by Seiji Kisaragi in Episode 1), deep brown almost black eyes and a thin figure with very attractive features that is fit for a model.

When the story begins, Yukari is an attractive girl with a rather boring, unattractive and most of all cynical personality who is very focused on her studies and her entrance exams almost obsessively so. As the story goes on, it is easy to see that she is very unsure of herself and is not made better by her mother's persistence. Her mothers persistence to do her best rubbed off on her as she tries to go well beyond her limits. She still manages to disappoint Yasuko Hayasaka, occasionally being slapped or yelled at; though this is only because Suguru Hayasaka is a child prodigy and where Yukari lacks, he excels. Her tireless efforts go unnoticed and because of this she starts to tire of school work all together.

One thing that Ai Yazawa does magnificently is show how Yukari really changes throughout the story. At first, she is a rather boring and unhappy girl with a lacking personality. Once she meets the Para-crew and reluctantly joins them, her personality slowly changes. Though she still can be very selfish, mean, and catty, her   intense relationship with George pushes her to grab hold of her identity, despite the fact that she feels he is a cold and manipulative man.

Even though Yukari isn't a bad student, Suguru Hayasaka is a child prodigy and Yukari was expected to do well in school from a young age. When she failed her first entrance exam for a reputable elementary school, Yukari worked harder on studying constantly and succeeds at getting into Seiei Academy.

When the story starts, Yukari is 18 and a senior high school student at Seiei Academy where her life seemed rather boring and meaningless up until the point that she is discovered by Arashi Nagase and Isabella Yamamoto. When she first meets the para-crew, she is very cruel to them saying what they do is meaningless. However, as time goes by and she starts to get to know the para-crew, she starts to loosen up. Not only does her personality change, but her entire demeanor. Eventually, she even falls in love with Jōji Koizumi who is the most influential member of them all.

Yukari Hayasaka is voiced by Yu Yamada in the anime series. 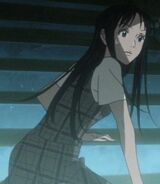 Yukari being called Caroline for the first time 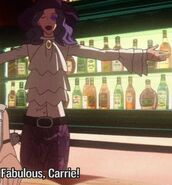 Add a photo to this gallery

Retrieved from "https://parakiss.fandom.com/wiki/Yukari_Hayasaka?oldid=5679"
Community content is available under CC-BY-SA unless otherwise noted.